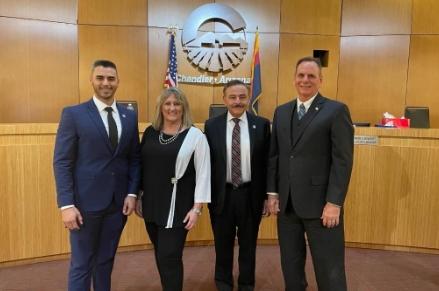 After the Council installation ceremony, the new Council held a special meeting to elect a new vice mayor. The Council unanimously selected Matt Orlando to serve in this role through Jan. 11, 2024.

Mayor Hartke was first elected as mayor in January 2019. He previously served nine years on the City Council, first as an interim Councilmember in 2008, and then was elected to consecutive terms and served from January 2011 to January 2019. Mayor Hartke also served as vice mayor twice, in 2015 and 2017. He has resided in Chandler since 1985.

Councilmember Poston has lived in Chandler for the past 13 years and also is a former City of Chandler employee. Councilmember Encinas is a native of Chandler and is the first LGBTQ person to serve on the Council. Both newly sworn-in Councilmembers will serve four-year terms through January 2027.

Detailed bios and contact information for each City Councilmember is available online at Chandler Mayor & Council.