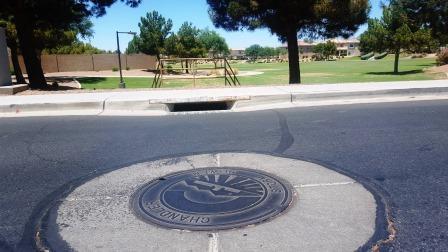 The City of Chandler is required to prepare and maintain a Stormwater Management Program (SWMP) to ensure the City complies with state and federal regulations.

Stormwater is the runoff generated from rainfall. When it rains in urban areas, stormwater runs off buildings and paved areas instead of soaking into the ground. The City’s storm drain system is designed to move that stormwater along conveyances like city streets and gutters where it is directed into storm drains or spillways constructed along the street, and eventually deposited into retention basins, greenbelt areas, parks and lakes within the community.

The City’s SWMP is meant to help residents understand the effects of stormwater drainage and to educate them on how to reduce pollutants into the storm drain system.

David Verhelst, Chandler’s stormwater program coordinator says, “It’s important for us to get feedback from Chandler residents to learn where program improvements can be made.” The City is asking residents to participate in the review and implementation of the SWMP. Access the current SWMP and submit your comments to David Verhelst.

This announcement starts a 30-day public comment period. The City will then compile the comments, and use them to assist in revising and improving the program. The SWMP is anticipated to be revised with the appropriate changes during Fiscal Year 2020/21.

@cityofchandler
@cityofchandler
The Gallery @ChandlerArts presents an intimate view of the world of local photographer Shaunté Glover. “…no matter what they are doing…you can feel her deep affection for the person in the frame.”… Read More... Read More
@cityofchandler