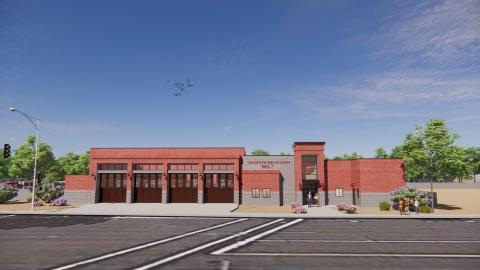 “Station No. 282 is located in an ideal location and consistently handles our highest call volumes in Chandler,” said Fire Chief Tom Dwiggins. “These improvements will enable a second engine company to be relocated to the new station, improving our emergency response capabilities in this area of Chandler.”

The agreement enables a new Fire Station No. 282 to be built in stages at the site. The new station will provide four vehicle bays for fire apparatus and a facility to house two four-person engine companies on-site. The second engine company would be relocated from another existing fire station due to the high call volume experienced in this area.

Chandler Fire personnel will continue to work and respond to emergency calls from the site while the new fire station is being built and the existing fire station is demolished. The current fire station was built in 1986 and the facility is undersized for the area’s needs.

The Chandler City Council also awarded a $478,410 contract to Kitchell CEM to perform construction management services while the project is built.

The rebuild of Fire Station No. 282 is funded through a bond authorization approved by Chandler voters in November 2021. It marks the first project in a series of infrastructure and facility improvements to be implemented in the coming years through this bond authorization.