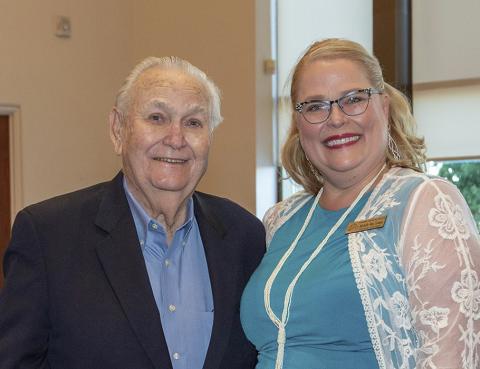 A Celebration of Life service for former Chandler Mayor Jerry Brooks will be held at 10 a.m. Saturday, Feb. 1, 2020, at the Chandler Center for the Arts (CCA). Brooks, who served as mayor from 1984-1988, passed away on Jan. 14. For many people in the community, Brooks was more than a political figure, he was a visionary leader and committed advocate of the arts in his city. [pictured at left: Former Mayor Jerry Brooks and Center for the Arts General Manager Michelle Mac Lennan]

During his tenure in City Hall, Brooks was instrumental to the construction of the performing arts center. It was his vision to create a cultural facility in order to attract international high tech companies to the community and provide a higher quality of life for residents. The state-of-the-art, shared-use Center for the Arts was designed by Dr. Wendall Rossman and opened its doors in 1989. It serves the needs of Chandler Unified School District students during the week and provides world class entertainment to residents most weekends.

“Without the vision of Mayor Jerry Brooks, Chandler Center for the Arts might not be here,” says CCA General Manager Michelle Mac Lennan. “He was a vital advocate and supporter of arts and culture in our community. Mayor Brooks’ vision, leadership and passion will continue to be an inspiration to all of us.”

Chandler Center for the Arts and Chandler Cultural Foundation honored Brooks with the Applause Award in 2012, an honor given to an individual who has made outstanding contributions to the enrichment of our community life through appreciation and support of the arts. More recently Brooks was the chair of a committee that was working on long-range plans for the Center, leading efforts for a facility needs assessment and building scenarios for expanding the performing arts in the community.