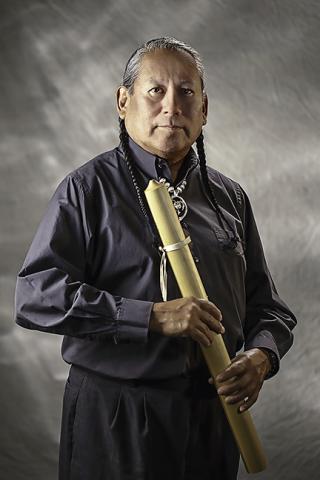 Native American identity, experiences, and culture will be explored during the first presentation in the One World, Many Voices performance series hosted by Chandler Public Library on Saturday, April 13, 2019. “Coyote in the Outer World” with R. Carlos Nakai will be held from 1-4 p.m. at the Chandler Downtown Library, 22 S. Delaware St.

Nakai will discuss how Native Americans form identity on their journey into the outer world beyond their cultural homes and how this journey can teach all of us about how we form identity. An 11-time Grammy nominee, Gold and Platinum Record winner, and recipient of the Governor's Arts Award, Nakai will open his cultural exploration with a brief performance of the Native American flute.

In addition to the performances by Native American musicians, dancers, and storytellers, One World, Many Voices features a traveling photography exhibition featuring the artists of Canyon Records, an Arizona-based record label specializing in Native American music for 67 years. Canyon Records is presenting the exhibit in association with Pueblo Grande Museum. It will first be on display at the Downtown Library from April 13 through April 28, before traveling to each of the other Chandler Library locations.

One World, Many Voices highlights cultural themes connected to the photography on topics such as ethnic perspective, family, identity, and the meaning of "traditional." The exhibit features the photography of Robert Doyle, president of Canyon Records, who shot the images for use in the production and marketing of Canyon's recordings.

“I’m grateful that the Chandler Public Library provided me the opportunity to share my images of Canyon artists, some of whom I’ve worked with for decades,” Doyle said. “Collaborating with the Library has been a satisfyingly creative and productive process. Chandler Library and Canyon Records share an understanding of the need to make cultural experiences easily accessible so that people can learn, form new perspectives, enjoy the artistic and cultural riches of different communities, and have a good time. Hopefully, our audiences will come away with a richer understanding of how Canyon artists influence and are influenced by the worlds they live in.”

The five performances of the series are an opportunity for all ages to experience, enjoy and learn from Native American artists through music, stories, poetry and dance. Each performance includes an opportunity for audience discussion and questions as well as the chance to meet the artists personally. Dr. David Martinez (Akimel O’odham), Angelo Joaquin (Tohono O’odham), and Robert Doyle will serve as moderators.

In addition to R. Carlos Nakai (Navajo-Ute) on April 13, other performances in the series include:  Tony Duncan (Apache-Mandan/Arikara/Hidatsa) in “Hoop Dance 101”; Roman, Joel, and Tahj Orona (Apache) in “Sons and Fathers, Apache Music, Stories and Poetry”; and Xavier Quijas Yxayotl (Huichol) in “Our People of the South,” a bilingual presentation of Aztec-inspired music and Mexicá stories.

The performances are free, but registration is required.

The One World, Many Voices Performance Series is made possible by the Arizona Humanities, an affiliate of the National Endowment for the Humanities. Since 1973, Arizona Humanities has supported public programs that promote understanding of the human experience with cultural, educational, and nonprofit organizations across Arizona.

For more information, contact the Chandler Public Library at 480-782-2800, or visit chandlerlibrary.org.

(The One World, Many Voices exhibit will be on display at the Downtown Library, April 13-April 28)

In a special presentation, R. Carlos Nakai will discuss how Native Americans form identity on their journey into the outer world beyond their cultural homes and how this journey applies to and can teach all of us about how we form identity. An 11-time Grammy nominee, Gold and Platinum Record winner, and recipient of the Governor's Arts Award, Nakai will open his cultural exploration with a performance of the Native American flute. Robert Doyle, President of Canyon Records, will moderate the presentation and lead the audience discussion opportunity.

Five-time world championship hoop dancer Tony Duncan will conduct a master class in the art of hoop dancing. After demonstrating the dance that has taken him around the world, Tony will invite children (and brave adults!) to pick up hoops and learn the steps, moves and grooves of hoop dancing. Additionally, Tony will perform original songs for the Native American flute. Questions and answers will follow the performance, led by Dr. David Martinez.

Native American survival has been made possible through strong clan and family relationships, especially between fathers and sons. Three generations of the Orona family – Joel, Roman and Tahj – will share the strength and renewal of the Apache through music, stories and poetry. Questions and answers will follow the performance, led by Dr. David Martinez.

Xavier Quijas Yxayotl presents music, stories and instruments from Native Mexicá. Of the Huichol people of Mexico, Xavier will describe how he built performance replicas of Aztec flutes found only in museums and created his own variations upon those ancient designs. He will perform using clay flutes, double flutes, drums and the eerie death whistle. Questions and answers will follow the performance, led by Dr. David Martinez.

Come dance to the polkas, cumbias and two-steps of waila, the popular music of the Akimel O’odham and Tohono O’odham of central and southern Arizona. A unique Native American variation on Mexican norteño music, waila (also known as chicken scratch) fills the air at all-night parties in O'odham communities on any Saturday night. Join the dancing at the Chandler Downtown Community Center.  An audience discussion will follow the performance.