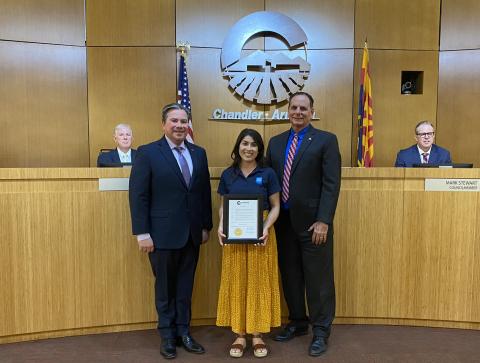 During Thursday’s meeting, a briefing on the current status of the Diversity, Equity and Inclusion Assessment was presented to the City Council.

At the Study Session, the Mayor and City Council proclaimed:

In addition, the following received recognition:

The next meeting of the Chandler City Council will be at 6 p.m. Monday, April 25. Council meetings are aired live, as well as replayed on the Chandler Channel - Cable Channel 11, streamed online at chandleraz.gov/video and on YouTube at youtube.com/cityofchandler.

The City Clerk’s office posts official meeting results the morning following Council meetings. For a complete list of actions taken, visit chandleraz.gov/MeetingsAndAgendas. Throughout the agenda, items are posted in red to signify any changes made at the meeting, and who voted no, or abstained.

For past City Council meeting minutes, visit chandleraz.gov/MeetingsAndAgendas or contact the City Clerk’s Office at 480-782-2180. For any other information, contact the Communications and Public Affairs Department at 480-782-2000.