The information below pertains to the 2022 City of Chandler Candidate Election.

Thank you for your interest in becoming a candidate in the 2022 City of Chandler Election. This information is an important first step in the election process and has been prepared to provide you with information and candidate requirements for the 2022 City Council Election.

While every effort is made to provide a comprehensive overview of the election process for the City of Chandler, this candidate information and the noted resources are provided with the understanding that City Clerk staff cannot render legal or financial advice. It is the candidate’s responsibility to ensure that all legal requirements have been met. 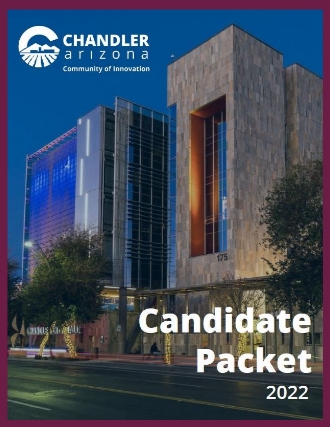 To be eligible to serve on the Chandler City Council you must:

The following nomination procedures must be performed.

Before collecting any signatures the Candidate Statement of Interest must be filed with the City Clerk's Office.

At least 1,000 and not more than 3,657 signatures of qualified registered voters of the City of Chandler is required.

The following paperwork must be filed during the nomination filing period:

View a video demonstrating how to set up a candidate portal via E-QUAL.