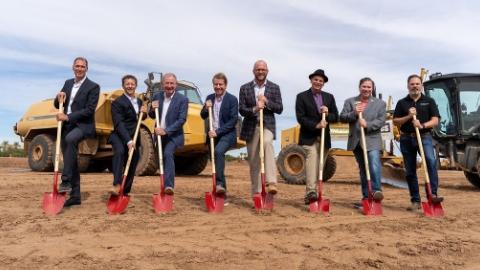 The project, which is located at 2411 E. Germann Road, between Gilbert and Cooper roads, is Comunale’s first ground-up industrial development in Arizona. It is slated for completion during second quarter 2022.

“The City of Chandler touts many firsts in Arizona and we appreciate the investment that Comunale Properties has made with their first Class A Industrial 201,000 square feet project in Arizona,” stated Mayor Kevin Hartke. “The Chandler Airpark area is Chandler’s final frontier for development and employment growth, with a 2.8% vacancy rate of Industrial properties, we are confident that it was a wise investment and look forward to welcoming the jobs it will bring to Chandler.”

“We’ve looked forward to the start of construction at Chandler Connection since first making the decision to expand into the Phoenix market,” said John Comunale, President of Comunale Properties. “We are confident that we’re building the right product, in the right place and at the right time, and appreciate the support this project has received from the City of Chandler and our development partners.”

“Comunale has approached this development with the highest level of care – from selecting a premier project team to the quality of the building itself,” said SLC President and CEO Jamie Godwin. “That is something that prospective tenants and the industry as a whole will see reflected in the final product.”

Developed as a mid-bay industrial project, amenities at Chandler Connection include 32’ clear height, 140’ to 240’ bay depth, 52’ x 60’ column spacing and a 135’, fenced and secured concrete truck court. The project has dock-high and drive-in loading, and can accommodate users ranging from full-building down to 14,500 square feet.

"Historically, this submarket would not have seen industrial buildings ranging from 200,000 to 500,000 square feet being built on a speculative basis. The fact that we are experiencing this now, with projects like Chandler Connection, speaks to the current level of demand," said McClurg. "That has translated into very robust pre-lease interest for this project, with inquiries coming from both full-building and smaller tenant prospects – many of whom are flocking to the East Valley to support the growing local presence of giants like Amazon, Google and Intel."

Tenants at Chandler Crossing will benefit from a prominent Germann Road frontage, less than one mile south of the Loop 202, minutes from two full-diamond freeway interchanges at Cooper and Gilbert roads, and a short drive to Phoenix-Mesa Gateway Airport and Sky Harbor International Airport. It sits adjacent to Chandler Municipal Airport and within a commercial hub of more than 2 million square feet of retail, restaurant and hotel amenities.

Comunale continues to seek land and acquisition opportunities in the Southeast Valley and across metro Phoenix. To learn more, visit Comunale Properties.

About Stevens Leinweber Construction, Inc.
Stevens-Leinweber Construction (SLC) is one of the Valley’s most active ground-up and tenant improvement contractors, providing both general contracting and design-build services to SLC clients across the office, industrial, retail and mixed-use sectors. Respected by architects, designers, owners and developers, the company is selected time and again to complete some of the Valley’s most prominent projects. Over its 40-year history, SLC has completed more than 8,500 projects in the Phoenix metro area.