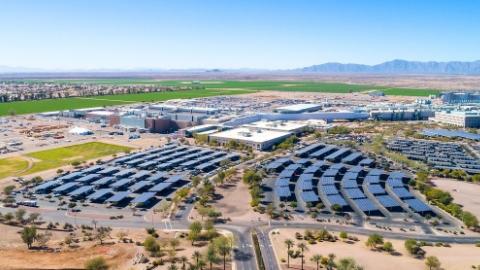 Chandler Mayor Kevin Hartke represented the City of Chandler at Intel’s announcement of the largest private investment of any kind in Arizona history.

“Intel’s continued expansion of its largest, most advanced manufacturing site in the world exemplifies the presence of innovation in Chandler,” said Chandler Mayor Kevin Hartke. “A talented workforce, excellent quality of life, proactive planning and decades of infrastructure investments enable global innovators like Intel to excel in our community.”

“Intel is proud to, once again, expand our manufacturing capabilities in Arizona by constructing two new fabs at our Ocotillo campus," said Jim Evers, Vice President and Factory Manager, Intel Corporation. "We are proud to have a 40-year legacy of innovating in Arizona and are grateful to the City of Chandler for creating a business environment that encourages these types of investments.”

Intel said its expansion will add more than 3,000 hi-tech, high-wage jobs and support an additional 15,000 jobs indirectly.  Another 3,000 construction jobs will be employed while the fabrication facilities are being built. Intel said construction is slated to begin later this year.

Micah Miranda, Chandler’s Economic Development Director, noted that an investment of this magnitude has significant supply chain implications for local businesses as Intel annually spends about $1.5 billion with Chandler-based suppliers and another $3 billion with other Arizona-based suppliers.

“Existing and prospective Intel suppliers can connect with our economic development team for assistance with office and industrial space site selection in Chandler,” said Miranda. Suppliers can use the initiate a project form to begin that process.

Intel’s presence in Chandler began in 1980 with its first production facility and it has grown to become the City’s largest employer. Intel celebrated 40 years in Chandler last year and it opened Fab 42, a $7 billion investment that created the most advanced manufacturing facility in the world. Today’s announcement will add to its manufacturing presence and jobs with more than 15,000 Intel employees expected to be working in Chandler once the new fabs come online.

About Intel
Intel (Nasdaq: INTC) is an industry leader, creating world-changing technology that enables global progress and enriches lives. Inspired by Moore’s Law, we continuously work to advance the design and manufacturing of semiconductors to help address our customers’ greatest challenges. By embedding intelligence in the cloud, network, edge and every kind of computing device, we unleash the potential of data to transform business and society for the better. To learn more about Intel’s innovations, go to Intel Newsroom and Intel.

About the City of Chandler:
Chandler, Ariz. has built a reputation as a Community of Innovation. Life in Chandler goes beyond a thriving and dynamic business community with progressive entrepreneurship. Known for its rich diversity, the City offers an outstanding quality of life for all generations with great schools and recreational opportunities. Chandler has grown to become the state's fourth-largest city with a population of more than 267,000. Chandler has been named one of the nation's Best Places to Find a Job and Best Cities for Women in Tech. The City also is one of the safest communities in the nation and boasts AAA bond ratings from all three national rating agencies, one of only 40 communities to achieve this distinction. For more information, visit the City website, or connect with the City on social media.