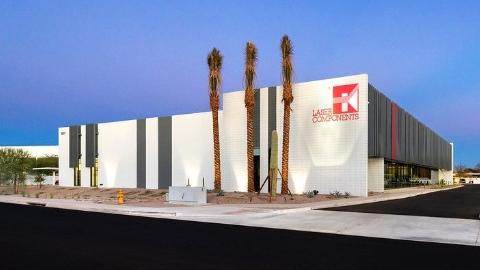 LASER COMPONENTS Detector Group is equipped for future growth. After almost a year of construction, the company has moved into its new, significantly larger building in Chandler, Arizona, at 2277 N. Nevada St. Optoelectronic components for key technologies such as medical technology and autonomous driving will be manufactured in the new building, which measures approximately 29,000 square feet. LASER COMPONENTS Detector Group currently has 40 employees and this new building will allow for future employment growth. In single-shift operation, the production facility comfortably accommodates 80 employees; approximately 200 in a three-shift rotation.

At more than 12,000 square feet, ISO class 10,000 cleanrooms occupy almost half of the facility. Air locks in the entrance area and in the passageways for material transfer ensure strict particle control. In addition, the floor, work stations, and cleanroom clothing are protected against electrostatic discharge in accordance with IEC and ANSI industry standards.

During the planning stages of the building, great importance was assigned to elements that have been tested and proven at the headquarters in Germany: spacious social rooms such as a cafeteria with open areas and ultra-modern offices that support working in small teams. The design of the facade is also unmistakable for LASER COMPONENTS.

The work performed at LASER COMPONENTS Detector Group includes all steps in the development and manufacture of semiconductor detectors. The company specializes in a wide variety of technologies: In addition to silicon and InGaAs avalanche photodiodes for the detection of the smallest amounts of light, their product range also includes pyroelectric detectors for flame detection and PbS/PbSe-, InAs, and InGaAs photodiodes, which are mainly used for gas measurement. The company has been instrumental in fighting the COVID-19 pandemic by manufacturing a very large number of CO2 detectors that are used in ventilators produced by medical equipment manufacturers.

“We are thrilled to welcome LASER COMPONENTS and their highly skilled workforce to our Uptown Chandler employment corridor,” stated Chandler Mayor Kevin Hartke. “This advanced technology company is truly pushing the frontiers of innovation and we wish them many years of success at their state-of-the-art building.”

“For us, the new production center is also a clear commitment to the Phoenix metropolitan region,” says Patrick Paul, CEO of the LASER COMPONENTS Group. “In recent years, Chandler in particular has developed into a center for future technologies such as autonomous driving. We look forward to continuing to operate in such an exciting and dynamic environment.”

“With this building, we are able to meet the rapidly increasing demand for our technologies and create a basis for growth in the coming years,” says Raj Chakraborty, who recently took over management of the site from co-founder Dragan Grubisic. Grubisic will continue to be available to the company for special developments.

About LASER COMPONENTS:
Laser Components Detector Group, Inc. has been researching, developing, and manufacturing semiconductor detectors in Phoenix since 2004. Detection of light is our business. We are doing it through different detectors structures, made from different materials and capable of detecting light of intensity as low as a single photon or in the wavelength range way beyond the sensitivity of human eye.  The Detector Group specializes in engineering custom designs of individual configurations, resulting in high-performance Silicon Photodiodes, InGaAs Avalanche Photodiodes (APD), pyroelectric detectors, and Lead Salt IR Detectors for use in the detection of the smallest amounts of light and radiation. We fabricate, assemble, and test the vast majority of these products in-house. Our product range extends from low-cost APDs for commercial applications to high-end components used in military and aerospace applications. Our products feature in cutting edge applications such as LiDAR for autonomous vehicles, drone technology, satellite missions to name just a few. We also specialize in building complete receivers that are engineered to demonstrate high sensitivity, high wavelength range, and large frequency bandwidth.

About the City of Chandler:
Chandler, Ariz. has built a reputation as a Community of Innovation. Life in Chandler goes beyond a thriving and dynamic business community with progressive entrepreneurship. Known for its rich diversity, the City offers an outstanding quality of life for all generations with great schools and recreational opportunities. Chandler has grown to become the state's fourth largest City with a population of more than 266,000. Chandler has been named one of the nation's Best Places to Find a Job and Best Cities for Women in Tech. The City also is one of the safest communities in the nation and boasts AAA bond ratings from all three national rating agencies, one of only 40 communities to achieve this distinction. For more information, visit the City website, or connect with the City on social media.

@cityofchandleraz
May is #MentalHealthAwarenessMonth. ⬇️ Read More
@cityofchandler
Mental health is something everyone should care about. #ChandlerPD recognizes May as… Read More