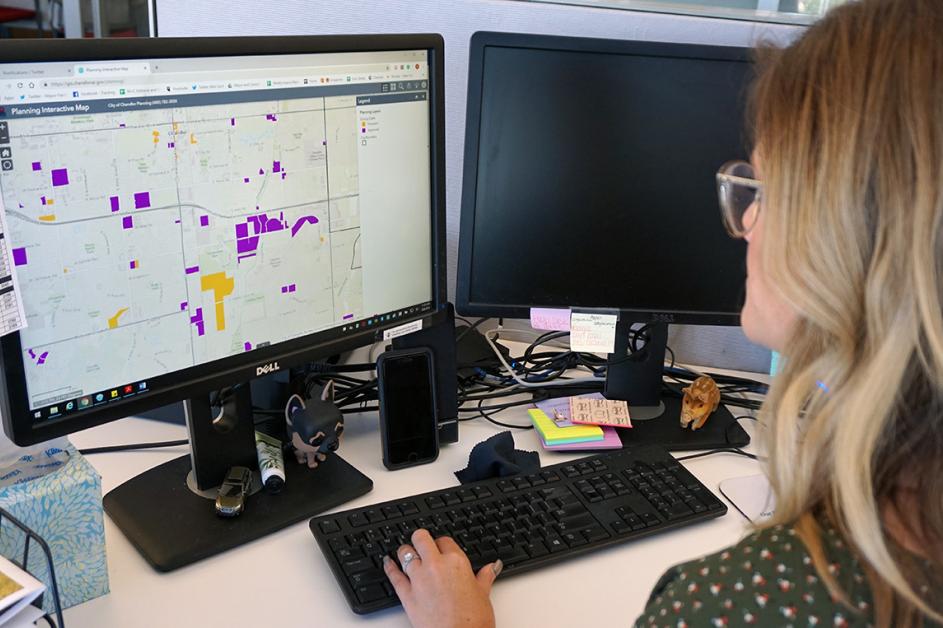 Have you ever passed a vacant lot and wondered, “What is going to go up there?” Next time you do, try looking up the space on the City’s Interactive Planning Map.

The City of Chandler allows you to view all current and proposed zoning cases on vacant properties in a user-friendly interactive map, searchable by location, name or case number. Select the parcel you’re wondering about and find details about each project, including development plans, zoning notes and public hearing information.

In an effort to make information residents need more accessible and convenient, the City organized the map to show the most relevant information for potential searchers. The map allows you to easily click through documents from both the City and developers. If public hearings are scheduled to discuss a proposed development, their dates, times and locations are included in the listing.

On the map, you’ll find parcels in two different colors: purple and orange. Orange parcels are proposed, and input from the public is encouraged. They include information about upcoming public hearings to discuss the parcel’s potential approval.

Purple parcels have been approved by the City Council and are on their way to development. The information available for these projects may include information from the public hearings, as well as staff memos and approval exhibits.

The Importance of Transparent Zoning

Zoning is one of the most important tools Chandler uses to ensure residential, industrial, recreational and commercial growth properly follow the City’s General Plan that was adopted by the City Council and ratified by voters in 2016. Zoning allows the City to manage the physical development of land within our city limits and dictate what can and cannot be developed, based on what best serves the needs of residents.

The Interactive Planning Map can be used to find dates, locations and meeting information for upcoming public hearings. Residents are encouraged to connect with the City during the process of zoning and development to provide feedback on community and neighborhood projects.

Connect with Development Services on Nextdoor

The City is bringing the zoning conversation into the 21st Century. Follow the City of Chandler on Nextdoor to get updates on proposed projects and upcoming hearings in your neighborhood.