This Memorial Day, we reflect on the enduring sacrifices made by the men and women of the United States Armed Forces.

To honor the Southeast Valley’s past, present and future Veterans, Veterans Oasis Park is undergoing the construction of a new memorial located on its grounds. The ”Field of Honor” monument is scheduled for completion by Veterans Day 2021 and will feature elements honoring six unique memorial themes.

Renderings for the Field of Honor 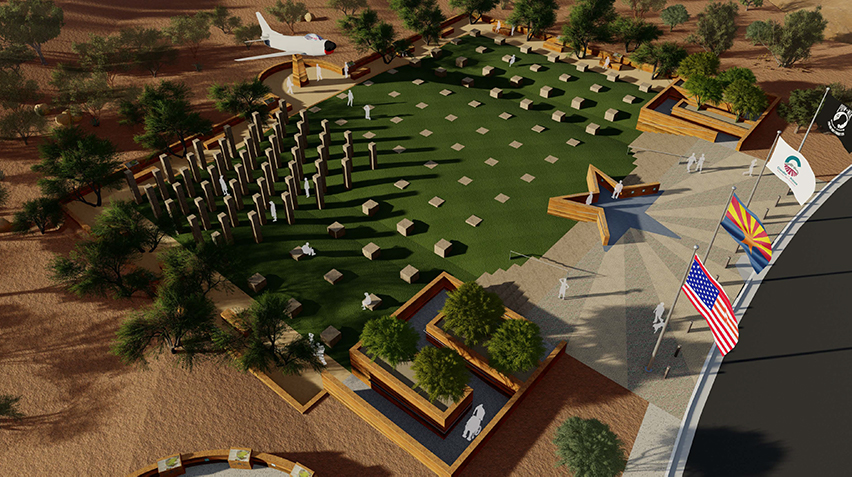 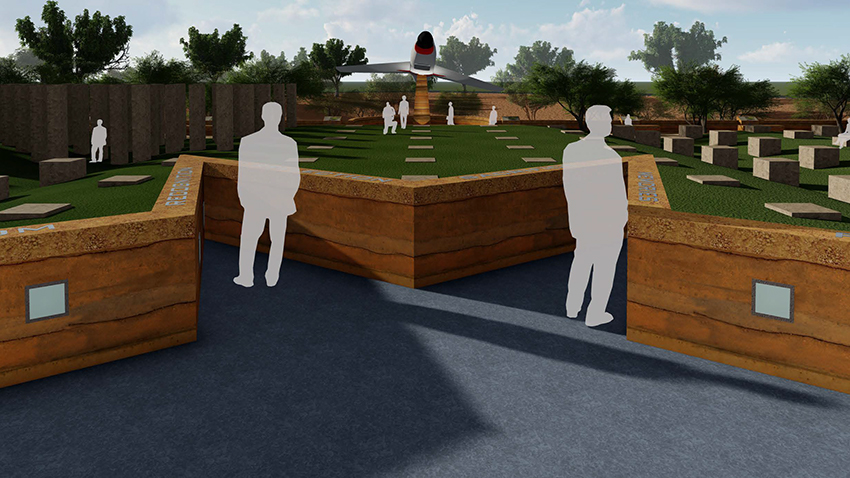 The renderings for the future memorial depict several elements that will ultimately tie together into one reverent space for remembrance and reflection.

The memorial will consist of an upper and lower level. The lower level of the memorial was designed to match the exact ratio of the American Flag. Stone plinths (columns) of various heights will map out the flag’s stars and stripes. The plinths will be constructed in a rolling landform to emulate the flag as it ripples blowing in the wind.

The stone plinths lined up in formation were designed to signify soldiers marching in unison. Within the rising and falling landscape, the stones appear to slowly disappear and reappear, which is meant to represent soldiers going off to war and returning home. Twenty-one of these cubes will be submerged entirely below the earth, symbolizing a twenty-one gun salute for soldiers who do not return from war.

The upper level features an elevated plaza overlooking the stars and stripes of the lower memorial. The overlook features a depiction of the star-shaped Arizona State flag. From the overlook, visitors can watch over the soldiers honored below and stand in solidarity while friends and loved ones are away. The upper-level star also represents the service flag of war mothers, which is hung in home windows when an immediate family member is serving in the military.

Freedom: When gathering input from the residents of Chandler about the future of the monument, the American Flag was consistently identified as a symbol of freedom. The lower level of the memorial was designed to be the exact ratio of the flag.

Recognition: The monument offers recognition for local, state and national veterans. The elevated overlook is reminiscent of the Arizona State Flag, while the lower level replicates the American Flag to honor those who have served.

Reflection: The City’s primary goal for the space is to provide a location to offer individuals and groups the opportunity for personal reflection. The memorial was designed to accommodate various group sizes and provide privacy from the rest of the park.

Sacrifice: The stone plinths signify soldiers marching in unison. As they rise and fall into the earth, they represent soldiers going off to war and returning home. Twenty-one of these cubes submerged below the earth symbolize the sacrifice of soldiers who do not return from war.

Memories: As the space lives on, there will be an opportunity to record personal memories and tributes within the blocks and walls of the memorial.

Family: The upper-level observation space represents the metaphor of loved ones watching over soldiers while they are away. The star also represents the War Mother’s Service flag, which families hang in their windows to indicate an immediate family member is away on duty.

Relocation of the Williams Air Force Base Memorial Plane 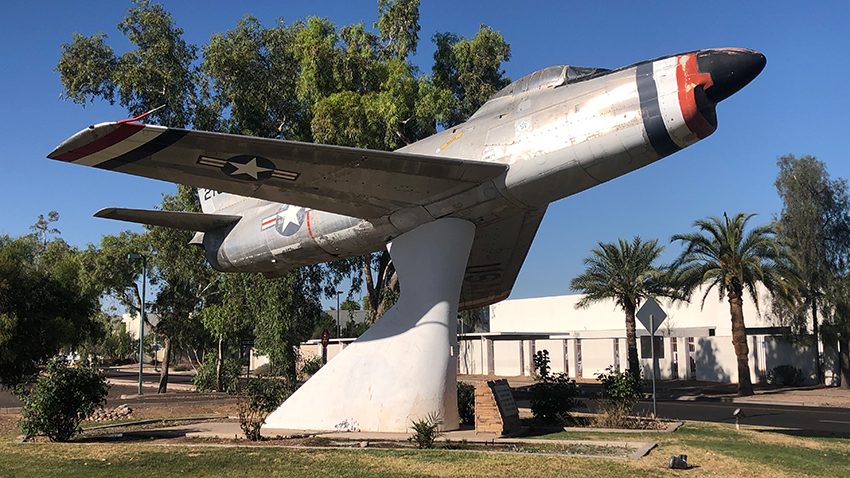 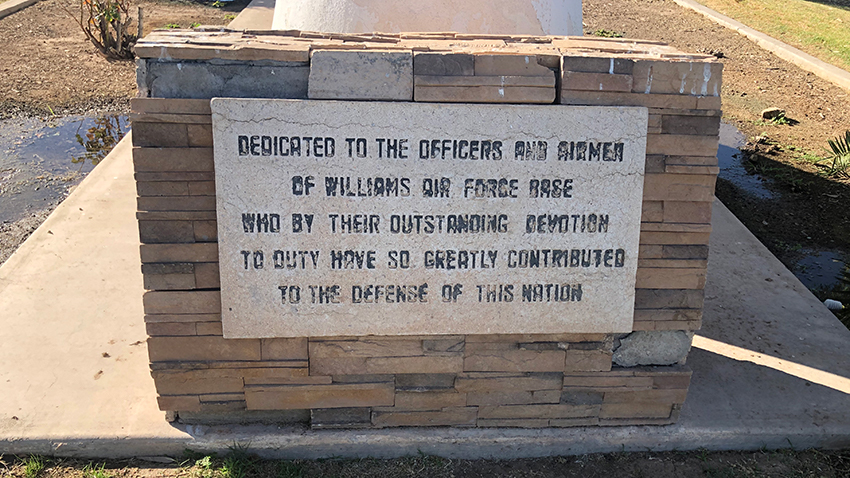 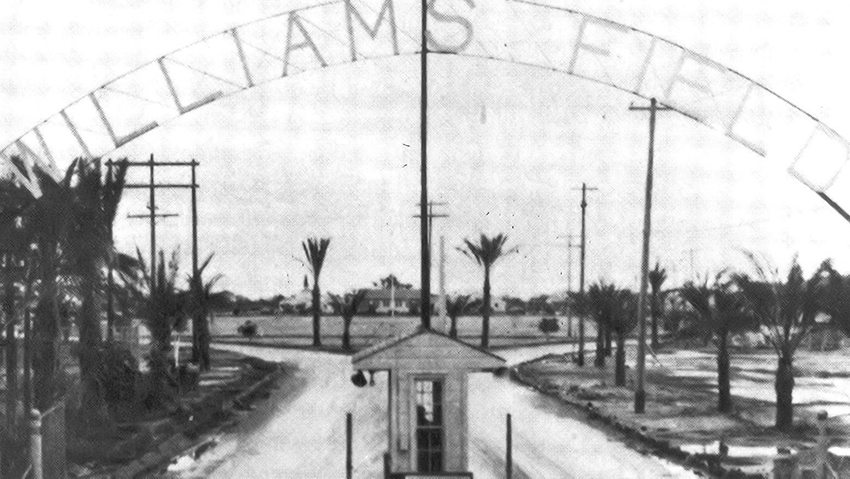 In addition to the new construction at the Field of Honor, a Chandler icon will also be relocated to the Veterans Oasis Park to honor the history of Arizona’s Williams Air Force Base.

Currently, a monument featuring a Korean War-era fighter plane is located in Downtown Chandler at the corner of Chandler Boulevard and Delaware Street. The plane features a plaque honoring the officers and airmen who served at the base, which was located east of Chandler and active from 1941 to 1993.

When in operation, off-duty soldiers frequented the amenities of Downtown Chandler for recreation and leisure. Many men and women stationed at Williams Air Force Base moved to Chandler following service and have built their lives here. The presence of the base is engrained in the history of Chandler itself.

This summer, the plane will be taken down from its current location for restoration and moved to a permanent home at Veterans Oasis Park to complement the Field of Honor memorial. The restoration and relocation of the plane are scheduled to be completed by the Veterans Day 2021 date. As depicted in the rendering images, the new location of the plane will be seen at the top-center of the monument, overlooking the Field of Honor.

Chandler’s Community Services Planning Manager Mickey Ohland says the Field of Honor will serve as a point of pride for Chandler, Gila River Indian Community and the entire East Valley.

“I think veterans and their families will find the memorial to be a solemn and inspiring tribute to their sacrifices, in times of peace and war, in service to preserving our freedom,” Ohland said.