Non-FAA control towers existed during the period from 1936 to 1981. They were most commonly associated with private companies at private airports, such as the airport at Culver City, California, which was owned and operated by Howard Hughes. These private towers had little oversight conducted by the government. Following the strike by air traffic controllers in 1981, the FAA entered into sole-source contracts with various airport sponsors to re-open control towers that were closed as a result of the strike.

The FAA Contract Tower Program (FCT) was inaugurated in 1994 when 150 FAA Level 1 control towers were identified to convert to contract services. Four companies were selected to administer the program. New towers, such as the one at Chandler Municipal Airport, have joined the growing number of contract towers, totaling 167 in all. The FAA has validated that contract towers can be operated at nearly 50% less than a FAA tower. FAA contract towers in Arizona include Laughlin-Bull Head City, Chandler, Flagstaff, Williams Gateway, Glendale, Goodyear and Ryan Field (Tucson). 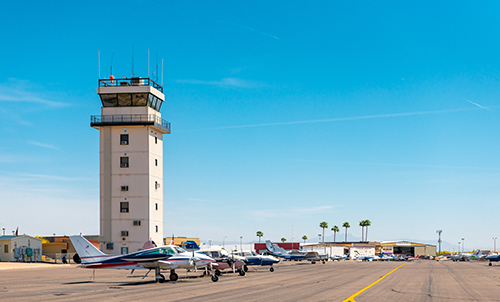 The Chandler FAA Contract Tower has been operational since May 17, 1995; the permanent tower was commissioned on July 13, 1998. Eight air traffic controllers reported to a temporary U. S. Air National Guard TSW-7 Mobile Control Tower on the south side of Chandler Municipal Airport. The Chandler traffic has increased dramatically since the inception of dedicated tower service. In March 1997, Chandler FCT reached a level of activity that would have qualified for level II status among FAA towers. The City of Chandler, in cooperation with the State of Arizona and the Salt River Project, constructed the permanent control tower in 1998.

The Purpose of Air Traffic Control

The primary purpose of the Air Traffic Control (ATC) system is to prevent a collision between aircraft operating in the system. Chandler Tower is tasked with providing "safe, expeditious, and orderly" air traffic service. Tower controllers apply the "rule of 3 S's".

First "S". They establish discipline out of what sometimes is chaos by assigning a Sequence. The controller instructs one aircraft to follow another aircraft.

Second "S". They monitor the progress of aircraft operating in the traffic pattern to ensure the appropriate Spacing is developing between aircraft that have been assigned an order of flight to guarantee that . . .

Third "S". The Separation, specified by FAA directives, will exist between aircraft on the runway surface.