The City's Park Operations Division has developed an innovative program to help keep our parks clean and beautiful. 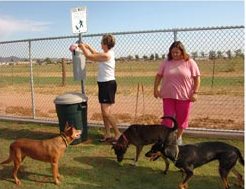 The City of Chandler has more than 50 beautiful parks, including three dog parks, which provide numerous social and recreational opportunities for residents and foster community pride. However, as most communities know, dog waste left on park grass and along trails is a common problem that generates many complaints.

The staff of the Chandler Park Development and Operations Division fields many complaints on this issue throughout the year. At the same time, dog owners have asked the City to provide amenities to help them collect and dispose of this waste.
Pre-manufactured dog-waste stations supplied with the standard plastic bags or mitts are used in many communities, including Chandler. The stations can cost between $75 and $100 each, and keeping them supplied with plastic bags can cost significantly more over time. The expense for the bags alone often limits the number of these amenities that can be purchased by larger communities with many parks.

For several years Chandler had 10 of these pre-manufactured dog-waste stations in five City parks. In just one year the Parks Division spent more than $6,000 on plastic mitts. While the need and desire existed to expand the program throughout the City, budgetary constraints precluded that option and had staff looking for alternatives.

Kris Kircher, Chandler's Parks Maintenance Superintendent, remembered a presentation he attended a couple of years ago during a session on Dog Parks at the annual Arizona Parks and Recreation Association Conference. For their new dog park a small community in northern Arizona had improvised a dog-waste station consisting of a post, an old mailbox turned upside down, and recycled plastic grocery bags. Chandler staff decided to incorporate this solution into a cost-effective program that could be expanded to parks citywide.

The materials required for one of these stations -- metal post, mailbox and signage - would cost approximately $50. The City would save money even after factoring in the expense of staff time to put the stations together. But the greater savings would be realized in the acquisition of plastic bags - obtaining donations versus purchasing them from a manufacturer. 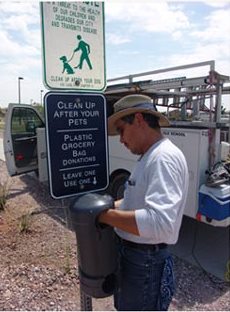 The key to the entire project would be whether Chandler residents would buy into the program and bring their extra plastic grocery bags to the stations, and in enough quantities to meet the needs of the park. The program was successfully tested at Hoopes Park in the fall of 2004. Signs on the station clearly explained that dog waste is a threat to public health and degrades the quality of the park. Residents responded favorably to the simple message of "leave one, use one" and kept the box supplied with plastic bags.

The next step would be to build a large quantity of stations and to obtain enough plastic grocery bags from shoppers for the initial allotment that would fill each box.

City staff purchased enough materials to build 100 stations and began the assembly process. About that same time, a Chandler Eagle Scout approached the Parks Division and volunteered to build half of the stations and assist with the installation.

To obtain a large quantity of plastic bags, Kircher placed a 90-gallon recycling bin at the Community Center and asked employees in the City Complex to bring in their excess bags and deposit them in the bin. Thousands of plastic bags quickly filled the bin and more come in every month.

Many of the plastic bags used in this program would normally go from the grocery store to the home to the trash can and ultimately end up in a landfill. With this program the bags still end up in the landfill, but first they are efficiently utilized one more time to serve the public good.

The project concept, while not original, was adopted and expanded by City staff in innovative ways to better meet the needs of Chandler residents. With this effort, 35 of Chandler's 52 parks now have dog-waste stations and the benefits are many; an important need has been met, residents are cooperative partners in keeping their parks clean, and tens of thousands of taxpayer dollars are being saved by giving a second life to a plentiful waste product.