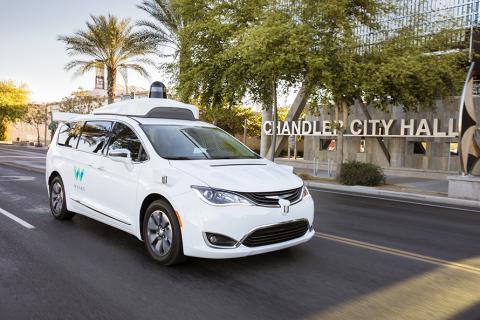 During this week’s City Council meeting, City Planning staff introduced an ordinance to amend parking and loading regulations in the City’s zoning code. The proposed zoning amendments would prepare Chandler for a future increase in autonomous vehicles and ride share usage.

Experts in the Planning industry suggest that with the change in transportation use, parking demand will be reduced and the demand for drop-off and pick-up areas will increase. However, no one is yet able to predict what that exact demand could be. As a result, Chandler’s proposed zoning amendments will allow more flexibility to adjust parking ratios as transportation behavior evolves.

“These zoning code amendments have many positive implications from increasing the amount of property available for revenue generating activity, demonstrating to the AV industry that Chandler is ‘open for business’ and further reinforcing Chandler’s brand recognition as the Innovation and Technology Hub of the Southwest,” said Mayor Jay Tibshraeny.

The proposed zoning amendments allow parking reductions based on parking demand studies and encourage passenger loading zones. The first change adds the ability to reduce parking when a parking demand study finds that a reduction in demand is directly due to an increase in autonomous vehicles and ridesharing. Under this provision, the zoning administrator would have the ability to reduce up to 40 percent of parking.

The second change under the proposed ordinance allows for a 10 percent parking reduction for each loading zone space for the following uses, up to a maximum of 40 percent:

Loading zone spaces that exceed the ratios above would not be eligible for the 10 percent parking reduction and larger reductions (up to a maximum of 40 percent) may be requested through a parking demand study. However, if the reductions were to cause a parking problem, the City’s zoning administrator will have the discretion to deny the request.

The proposed zoning amendments will be voted on by the Mayor and Council for final adoption on May 10, and once approved, will take effect on June 9. As a result, Chandler will become the first city in the nation to amend its zoning code specifically based on the increase of ridesharing and the use of autonomous vehicles.