Major Area Plans
Area plans begin to implement the General Plan's goals by providing more detailed goals, objectives and policies pertaining to each specific area. These Area Plans address unique characteristics and support unique land use planning and implementation strategies for each area. Area Plans do not and are not expected to cover the entire City. They range in size from under a square mile in some areas to more than fourteen square miles in Southeast Chandler. The following list identifies the major Area Plans that have been adopted but is not a complete list of area plans. There are several other area plans that have been approved and are considered implementation tools of the Chandler General Plan. Contact a city planner at 480-782-3000 to verify which area plan(s) apply to a specific property or a general area.

Hard copies of these area plans are available for view and/or purchase at our office located at 215 E. Buffalo Street, with exception to the Santan Freeway Corridor Area Plan, which is not available for purchase, but can be viewed upon asking a City Planner. 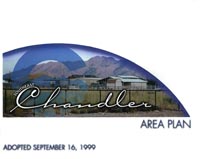 Chapter           Introduction (including Table of Contents and List of Figures) 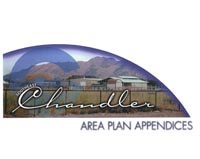 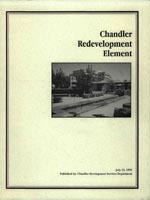 Acknowledgments, Resolution 2374, and Table of Contents 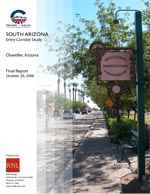 1         Introduction (including Table of Contents and List of Figures)

2 & 3 The Opportunity and The Strategy